At the moment I'm on my way to Sapporo for Yosakoi Soran Festival! Whoopwhoop! :) I'm so excited and nervous at the same time.

If you have no idea what is yosakoi, check out for example Wikipedia. Basically it's a really energetic Japanese dance style, which is fun to dance. :) Though actually any performance that has a part of the original Soran Bushi song implemented into it and uses the naruko clappers when dancing is considered yosakoi. That means the range of different styles is huge even if certain styles are more popular.

As I'm writing this on the go on my way to our local Ibaraki airport, this post will just a short announcement of how you can watch the festival online!

It's a huge festival (around 300 teams performing during 5 days) and they have live broadcast on Youtube from the main stage everyday. Our team, 水戸藩YOSAKOI連, will perform on the stage on Sat at 14:29 Japan Standard Time (UCT +9), meaning we'll be online around 08:29 Finnish time if the schedule holds (we seem to be the last ones of our round, so anything can happen).

Here's the Youtube link for Saturday: https://www.youtube.com/watch?v=yHKA20xPxfQ
And here's the schedule (6月11日 is for Saturday): http://www.yosakoi-soran.jp/files/news/file01/nishi8chome_160601.pdf

You can also find the live broadcasts for other days, but I'm trusting you'll find them without me linking them here :) Sunday evening is the time for finals, that should be an interesting watch.

Email ThisBlogThis!Share to TwitterShare to FacebookShare to Pinterest
Labels: yosakoi

As I mentioned before, this year I was too lazy to take any close-ups as I already had taken so many. My Facebook friends have already seen all these, but I'll share it anyway for those who are in Facebook, so you can notice that the somei yoshino type (the most common one, 2nd photo) is not the only type. All of these were taken in Kyoto in April 2014. 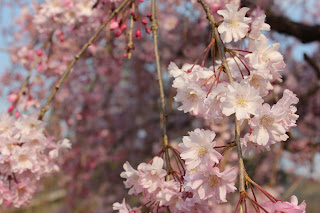 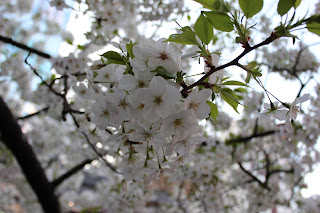 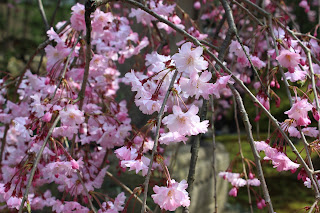 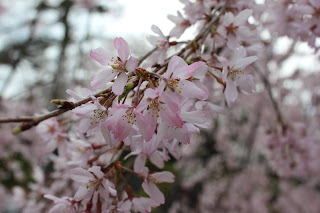 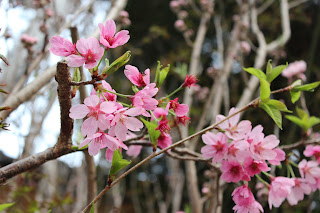 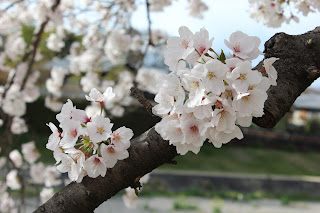 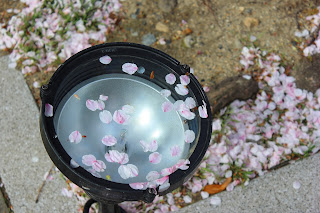 After the hanami weekend in Tokyo, it was time for hanami in Hitachi on Sat April 9th as the season here is usually a bit later than in Tokyo. This year though the sakuras all over Japan were apparently ahead of the average year schedule. There are several cherry blossom forecasts (桜予想) to follow, but these forecasts usually appear quite late for tourists to have any gain of it for their trip planning. I think best guess would be being in Japan during the first days of April and actually staying a bit longer in one place to assure you are there during the full bloom. I was lucky enough to spend one month in Kyoto two years ago in April thanks to our school for reorganizing the period system and leaving me without courses during the new 5th period.

On the 9th there was a Spring festival at our work place in Hitachi. Me, Anthony, Ed, Aidan, Alan and Mathilde decided to go and see it. Also generally no photos are allowed on the company area, but today was an exception. Though I actually think the prohibition applies only to the work related stuff so I've taken photos of the trees also before when they were in the early blooming stage. This post will again contain a lot of photos so I'm only posting full bloom ones.

The day was the first really warm one in Hitachi this spring and while we were walking from the train station to the company, many of us hoped we would not chosen jeans to wear in the morning. I even got a slight sunburn... 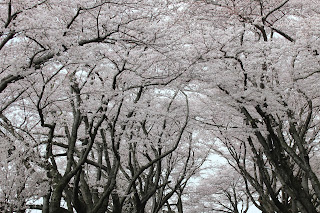 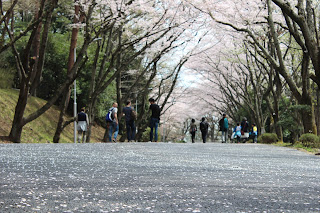 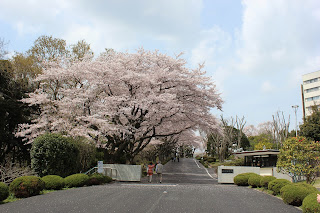 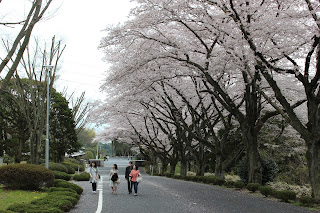 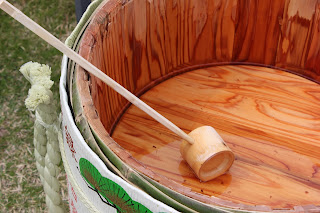 After the company festival, we headed for lunch near the station and then to Hitachi-shi for some more sakura. I could only make a short stop there as I had to go for a drinking party with my yosakoi teammates in Mito. No photos from there unfortunately, but I just love how my teammates (all Japanese) love my English pronunciation haha. "Say this, say this." "Waaa, so cool!" :D 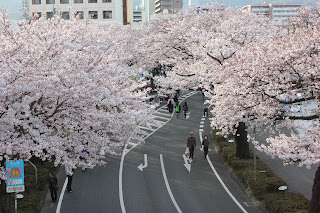 How are you doing?

A small update of what has been going on lately and how's the daily life here as the blog posts appear months later than the actual thing happened.

- I'm generally doing fine (yay).
- Living in Hitachi is good. More about it below (trying to keep the list clean).
- Got addicted to a melonpan they sell here every Wednesday, it's too good! This one actually has melon in it and they bake the melonpan in the van so when you get it's fresh and fluffy. Yummy!


- Got new friends from Malaysia (Jess and Adrian) who were also doing an internship in Hitachi and living at the same dorm. Their internship was also an 8-month one, but it ended in April and they've already gone home by now. :(


- Got some new friends from the new employees. Though they are all foreigners haha.
- Spent a wonderful Golden Week holiday with my fiancé Tuukka in Kyoto while meeting friends.


- Joined a yosakoi team at the end of January and keeping up quite well. Got an expensive costume (around 35,000 yen ~280 euros), but I love it. Had my stage debut a month ago and the first yosakoi matsuri/festival/competition is coming this weekend. In June I'll also participate the Yosakoi Soran Festival in Sapporo, which is the biggest yosakoi festival in Japan. Last year there were 270 teams, 27,000 participants and around 2 million visitors. Woopwoop!


- Starting playing taiko didn't turn out well as I went to a basketball practice in Jan and got a ball to my finger... The finger was not broken (did x-ray), but it's certainly not ok. It took almost three months to heal to partly ok. Even now, after four months, it hurts occasionally, but it's getting better. I could start taiko now, but yosakoi takes so much of my free time. The practice and performances also collide with the practice of one local taiko team whom I spoke with, so I guess I can't do it after all. :'( Have to play a lot of Taiko no Tatsujin instead!

General opinion about living in Hitachi

After the initial shock of "there's nothing here!" I came to realize I have all the most important things here: a supermarket and a 100-yen-shop next door, a couple of konbinis, a huge pharmacy store and a 24-hour book store on a way to the bus stop, an electric-appliance store half-way to the station and a train station relatively close. The train station could be closer, but it's still within a doable distance. And btw there used to be a station right next to our dorm, but they closed it ten years ago... That's why now our dorm seems to be in the middle of nowhere. There's also a really nice bath (onsen) only 2 km away from the dorm which even has a sea view. :) Here we also have both sea and mountains near and I really mean they are near. Though not as near as the mountains and river in Hitachi-daigo. We also have some restaurants, 100 yen per plate sushis and other ones as well as a Starbucks (here?!). The restaurants and Starbucks are not right next to our place, but within a doable distance with a bike.

Anyway, at first I was thought I would get bored here and was thinking what am I going to do with all the free time I have. But my schedule was quickly filled and I don't have problems with free time anymore, haha. Also once I got used to living here I realized how this is a lot like Finland. There's nothing much where I live in Finland even though I live relatively near the Helsinki (the capital) city center. From here, Mito, the prefecture capital, is quite close as well (30 mins by train), though it could be a bit more lively there's nothing much there either. For a short stay like mine, this place is a really nice one to see a different side of Japan. Not sure if I would like to stay here permanently, even though I love my yosakoi team and the melonpans and I'll be sad when I have to leave.

I don't even remember when was the last day I took easy at home. Generally since mid-April I've been busy and will be until mid-June mostly because of yosakoi and my fiancé visiting. In yosakoi we have an all-day practice (10:00-17:00) almost every Sun in a place that takes my 2 hours to go to. If I have free Saturdays (no practice or festival or holiday), but I usually spend them either by going somewhere with friends or writing the monthly reports for Vulcanus.
Posted by Kata at 21:11 No comments:

Keeping up a blog is hard when on your normal days nothing happens and on the days you do something you'll have like 300 photos to choose from.

So I decided to to share you my Instagram account, which at the moment is only starting, but which seems easier to update as you can do it on the go.

For ones, keeping a post short, here's a link: https://www.instagram.com/katainjapan/ 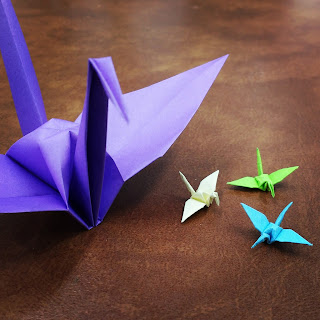 I'll try to update often and if nothing special happens, I'll post some other photos from my stay in Japan. :)
Posted by Kata at 19:30 No comments:

During the first weekend of April I headed for Tokyo to see the sakura, cherry blossoms, as the season is slightly earlier there than in 1.5-hours-north-of-Tokyo-by-express-train Hitachi/Ibaraki.

I was in Kyoto two years ago for one month and it happened to be April. Thus I have way too many closeup photos of the cherry blossoms and I was too lazy to take any anymore. I might post some from the two years just for you to see them, but this time it's only general hanami, flower watching, photos around Tokyo.

I travelled to Tokyo as usual on Friday night after work and stayed with my lovely host family. On Saturday I planned to meet friends for having a hanami at Ueno Park, which is one of the most popular places for hanami in Tokyo. Hanami itself greatly reminds me of the Finnish May Day picnic on the first of May (Vappu). Except that we don't have the beautiful flowers. But the basic idea of having a picnic and drinking with friends is the same. 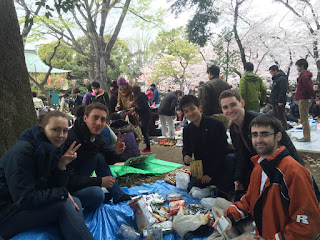 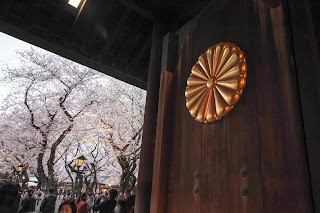 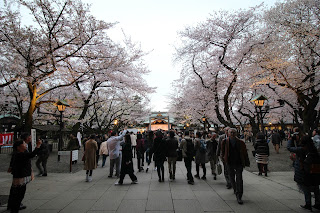 Our small group started to split after visiting Chidorigafuchi and in the end only me and Aidan visited Naka-Meguro, which was packed with people. The view would most likely have been better if we would have continued following the river further, but I was too tired of the crowds to even play with my camera and take decent photos.

Sunday was a rainy day so I spend it indoors with my host family. Me and Yuka, the daughter of the family who's a year older than me, took it easy and laid on the electrical carpet (it's waaaarm and so nice) while watching TV. A nice relaxing day after one a bit more tiring one. ^^